Uplift Albania announced the winners of the first batch of startups from Albania, Kosovo and Region

Uplift Albania, the first startup accelerator in Albania, announced on Monday the winners of the first batch of a 6-week of acceleration program between 7 competing startups from Albania, Kosovo and Region at a special event at “Jordan Misja” Artistic Lyceum. 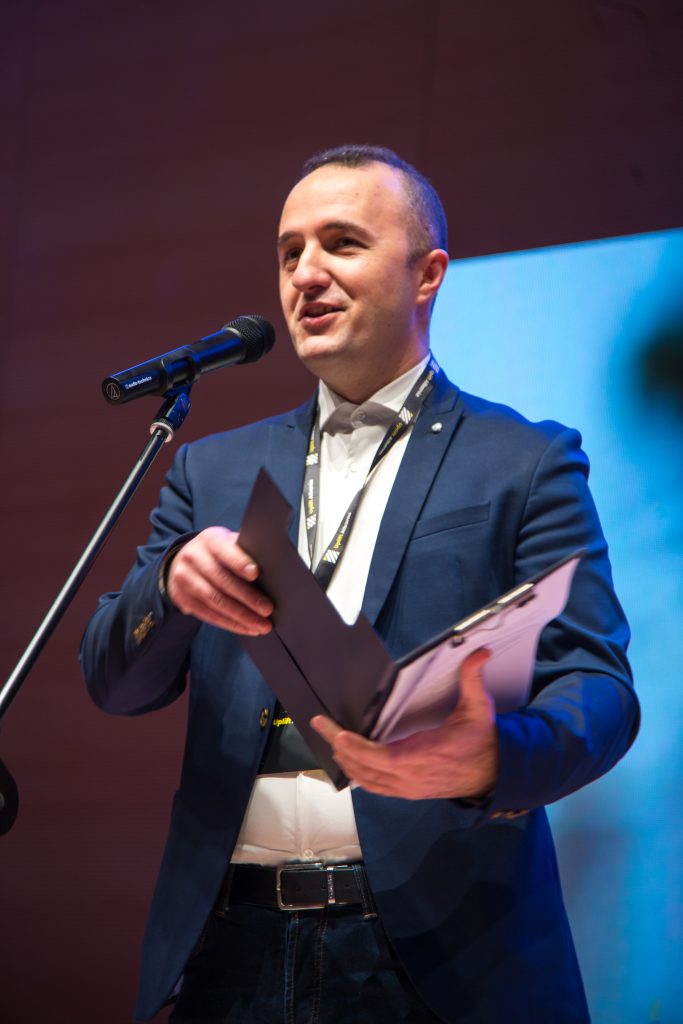 The first startup accelerator in Albania that took the attention of more than 50 startups from 6 different countries and 9 industries comes as a fruit of close cooperation between ICTSmedia publishing house, Slovak organization SOVVA and SlovakAid. 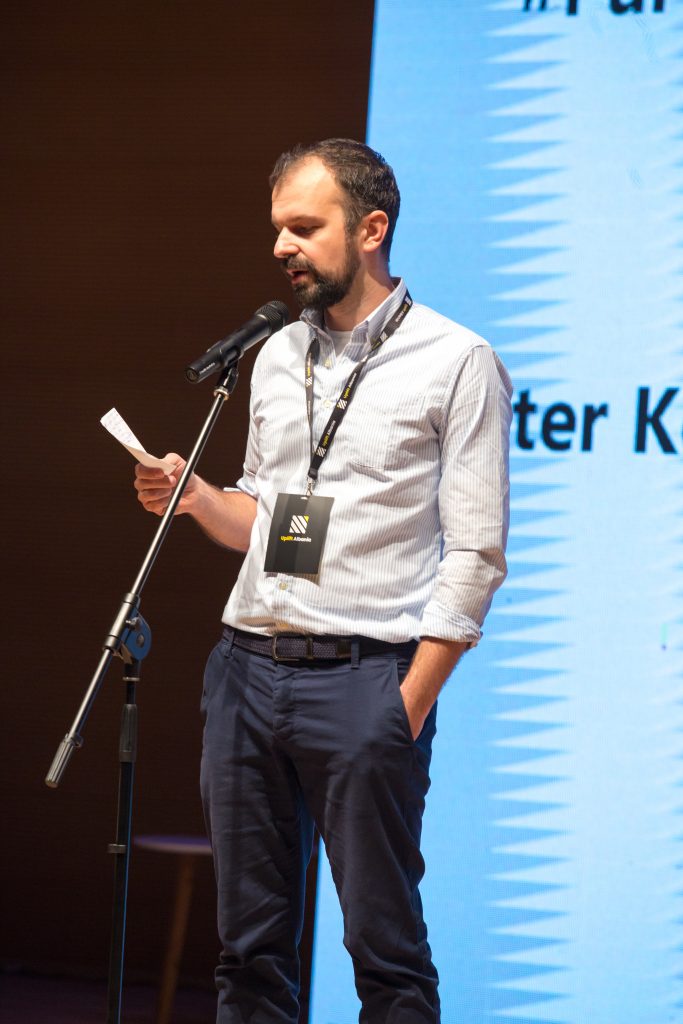 As with the economy in general, the startup community in Albania struggled to find the necessary space achieve growth and scale. Albanian startups turned into companies have had a difficult time to gain international recognition and success and the traditional approach towards business remains a key challenge for Albania.

“Getting together to help our talents with the support of our amazing community is the only way toward a better tomorrow for our children and future generations,” said co-founder of Albanian ICT Awards and partner at ICTSmedia Mr. Kushtrim Shala during his opening speech at “Demo-Day.”

Mr. Peter Kolesar, partner at CIVITTA and key supporter of Uplift Albania believes that passion for progress and innovation are two main things our people and organizations share in common. “Startup accelerator can bring a change for our countries and Uplift has been doing this for some time in Slovakia while the potential to do the same thing in Albania is there,” He said. 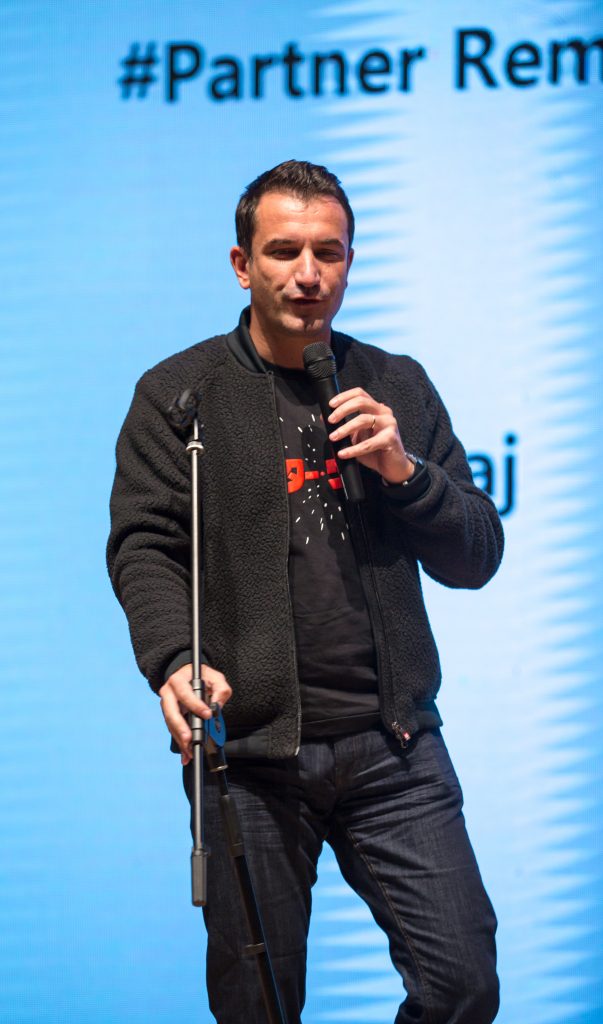 Tirana Mayor, a key supporter of ICTSmedia, praised such efforts and called upon universities to join similar initiatives like Uplift Albania.

“We Albanians, are ready to speak but not to listen. At ICTSmedia I have seen people ready to listen. What I have also witnessed in Slovakia that is missing here in Albania is the involvement of universities on such initiatives,” He said.

Parallel event Investor Connect gave every startup the chance to talk and communicate with Uplift Albania for 7 minutes in Speed Dating format.

During “Demo-Day”, PleXusvr, Ipervox, Amargi, iAvokat, Orar.al, Addo Group and Game On presented before investors and audience their businesses and aspirations 3 minutes each followed by a Q&A session with investors for another 3 minutes.

The team behind PleXusvr believe their creation which costs 12 dollars and has been approved by Facebook Oculus, is more than a game. Ipervox drew the attention of leading companies like Amazon with the promise to make the creation of audio applications for virtual assistants an easy job for everyone.

Amargi combines tradition in clothing with the power of technology in style proving potential of Albanian in fashion industry. iAvokat represents a platform of legal services and soon will do what is knows best beginning from Kosovo and covering the region in the next few years. 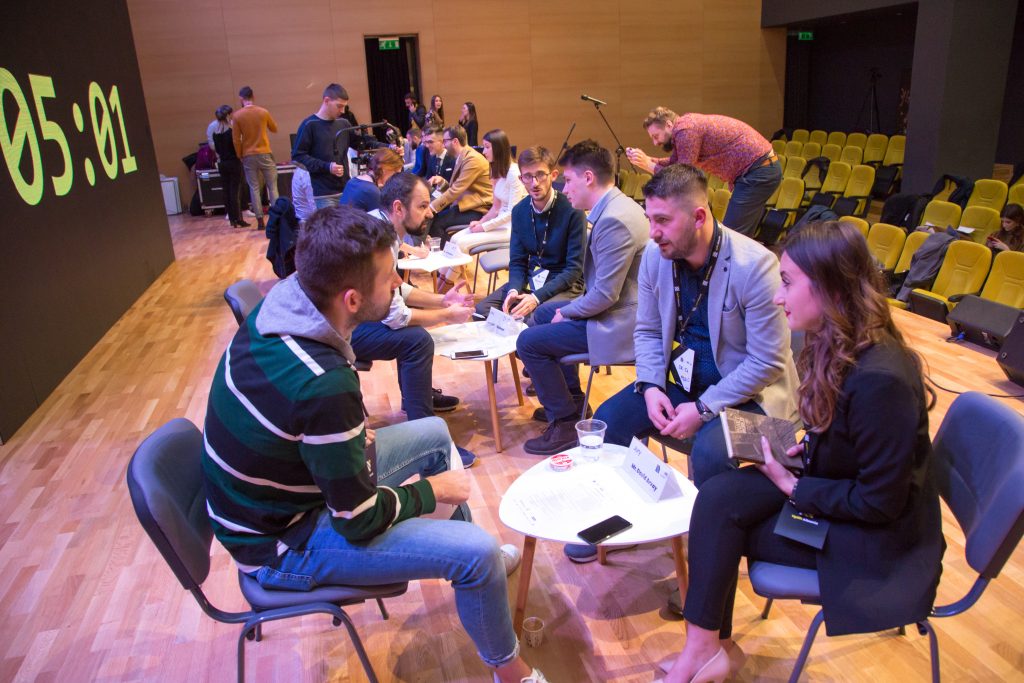 Albanian Uber, Addo Group, unfolded its ambitions to scale its services in Macedonia, Montenegro and region and every day process more than 30 rides. Game On the place where Albanian gamers can escape from every day the stressful everyday reality and Orar.al believes it can revolutionize aesthetic services industry in Albania.

After 40 minutes of presentations and Q&A from investors panel, the final moment of “Demo-Day” was upon us. During the winner’s announcement several surprises followed up from EU for Innovation and Tegeria. 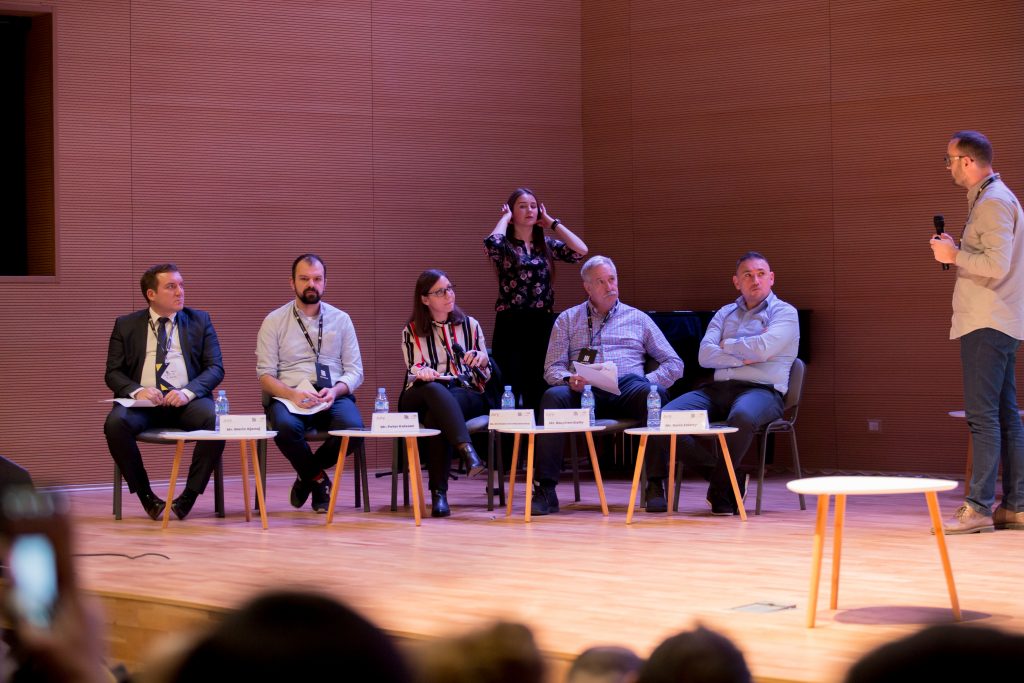 Game On, PleXusvr and Amargi were selected by EU for Innovation to join “Matchmaking and Exposure” Program in Berlin for 2-week with an advanced startup.

Tegeria, one of the key partners of Uplift Albania selected Amargi and Ipervox to compete at Web Summit from 2-5 November 2020 at Lisbon. 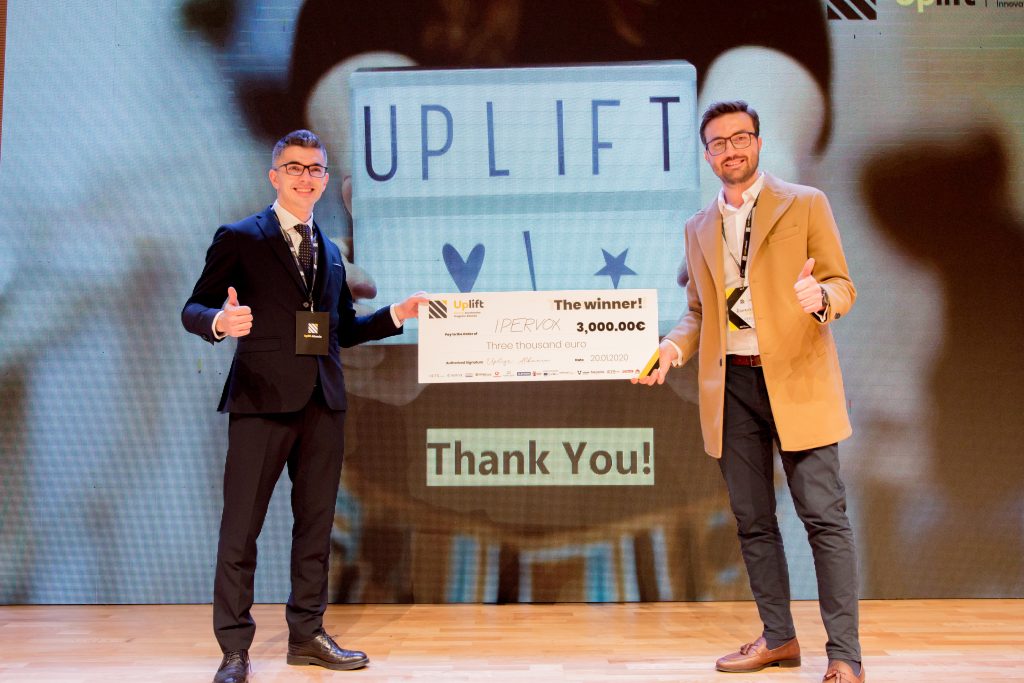 “Demo-Day” ended with the announcement of 3,000-euro prize winner awarded by CEO of SOVVA Daniel Straka to Ipervox. This startup recently joined World Champion List of Alexa for 2020.

It was the final day of the first batch of Uplift Albania. At Uplift Albania more than 50 startups from 6 regional countries and 9 difference industries applied. 20 of them were selected for Boot-Camp Selection and only 10 made it to the 6-week acceleration program.

By joining Uplift Albania, startups had the opportunity to meet 50+ industry experts, 21 mentors, and opportunity to raise up to 50,000 euro of potential investments through partner network and a prize of 3,000 euro for the best startup to be announced on “Demo-Day.” 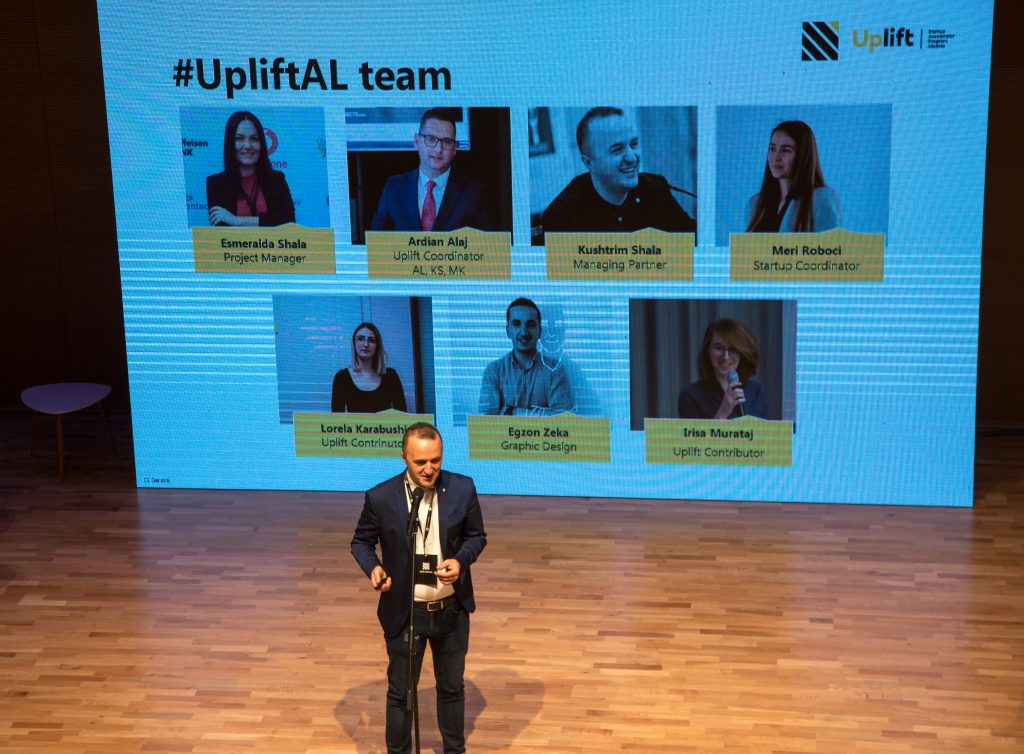 Uplift is organized as a collaboration between CIVITTA Slovakia and Impact HUB Bratislava with the aim to support and develop the Slovak startup and innovation ecosystem. It’s been a established brand in the Slovak startup ecosystem and number one choice for early stage startups.

Uplift Albania is a close cooperation between SOVVA as the organizing entity of this specific project helping ICTSmedia to transfer know-how and start the first 2 batches of UPLIFT. SlovakAid financially supports the project.

ICTSmedia is a leading publishing house in the region in the field of technology and information. Founder of Albanian ICT Awards, ICTSmedia support continuously similar event in Albania.

Multi-functional lab ICTSlab opened recently in Tirana with some of the best international curricula was made possible thanks to broad experience of ICTSmedia. It publishes some of the most viewed online medias dedicated to ICT like PCWorld Albanian.